P!nk Wiki
Register
Don't have an account?
Sign In
Advertisement
in: Songs, Songs from The Truth About Love

"Beam Me Up" is a song recorded by P!nk for her sixth studio album, The Truth About Love. It was written by P!nk and Billy Mann and produced by the latter.

In a live webchat with her fans the day of the album's release, P!nk revealed that "Beam Me Up" was written about a very close friend of hers who lost a child a year ago at a very young age, and that the song was the hardest song to write for the album. She added that the writing process for the song was extremely emotional, and that it would be a difficult song to sing on tour.[1]

The title of the song is thought to be a reference to the popular phrase "Beam me up, Scotty," as heard on Star Trek.

"Beam Me Up" was not included in the regular setlist of The Truth About Love Tour; however, on July 17, 2013, P!nk performed the majority of the song for the first time in Melbourne. She told audiences that she was performing it for a couple in the audience that had written to her about "something that they'd been through that, I'm sure, a lot of people have been through."[3]

She performed the full song with Billy Mann on October 23, 2014 at her "The Power of Pink: An Acoustic Evening with P!nk & Friends" event to benefit breast cancer research. 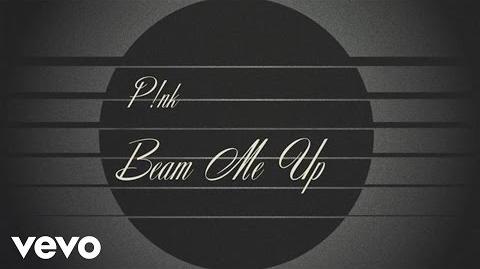