Blow Me (One Last Kiss)

"Blow Me (One Last Kiss)" is a song by American recording artist and songwriter P!nk, released as the lead single from her sixth studio album, The Truth About Love. The song was scheduled for a April premiere but was delivered a week earlier after an initial version was leaked online. Produced by Greg Kurstin, the song was named as "classic P!nk," and was very well received by music critics, who compared it to previous hits by P!nk, including "So What" and "Raise Your Glass". With "Blow Me (One Last Kiss)," P!nk ranks third among women with most Top 10's since 2000, behind Rihanna and Beyoncé, with twelve Top 10 hits in the USA, after scoring a massive jump on the Hot 100 during the song's second week, leaping from #58 to #9 after promotion on the iTunes Store.

The video for "Blow Me (One Last Kiss)" features a black and white picture and was directed by longtime collaborator Dave Meyers. It premiered on July 27, 2012 on MTV and VEVO.

On VH1 Storytellers, P!nk revealed that her relationship with her husband, Carey Hart served as inspiration for her writing the song.

On October 7, 2011, RCA Music Group announced that it would be disbanding Jive Records, along with Arista and J Records. With the shutdown, P!nk and all other artists previously signed to the labels, would release any future material through RCA Records. In 2011, Joe Riccitelli, an executive with the label, announced that P!nk was preparing to enter the studio to begin work on her sixth studio album, to be released in September 2012. On February 29, 2012, P!nk took to her Twitter account and confirmed that she was currently in the writing process for her new record. On June 19, 2012, P!nk announced via a video on Twitter that the first single from her upcoming album would be called "Blow Me (One Last Kiss)" and that it would be released on July 9, 2012. She added, "I think you're going to like it, because I really like it, and I like it enough for all of us." However, the demo version of the song leaked on July 1, 2012, a week before its scheduled release. The next day, it was released via P!nk's official website and her YouTube account. On July 4, 2012, P!nk announced that her sixth studio album will be titled The Truth About Love.

Speaking to Billboard in August 2012, Greg Kurstin revealed that he and the singer had trouble coming up with a name for the track. The producer had been working with P!nk on an intense nine-day songwriting session that yielded six songs. One particular track, an empowering breakup anthem in the vein of "So What", seemed like it might be written and recorded within a day—it just needed a title. "She kept coming back to 'Let's throw in the towel,' and it was one of those things where we had to say, 'Is that line really the song?'" Kurstin recalled. "So then I came back with 'Blow me … one last kiss' and we got really excited. Most of the time with P!nk, she's so strong writing lyrics I don't really interfere. I let her do her thing. That could've been the only time I did that."[1]

Speaking about the song, P!nk told Rolling Stone, "It's very easy for me to tap into 'go fuck yourself.' Maybe that's the only way I feel powerful. I'm in the best place I've ever been in my life, and I'd say it's 80 percent happiness and 20 percent sheer confusion and fear that I'll fuck it up somehow. I'm consumed by my emotions."[2] She later told Australia's Today that, "It's a really fun song. I can picture everyone extremely drunk dancing late at night together. It's a very happy song, although it's angry."[3]

Before performing the song on VH1 Storytellers, P!nk revealed that the song was inspired by her relationship with her husband, Carey Hart: "Everyone's always like, 'Are you having marital problems again?' I'm like, 'No, I'm just always mad enough at him to write a song!'"[4]

"Blow Me (One Last Kiss)" is an uptempo pop rock and dance-pop song with dance music influences with a duration of four minutes and 16 seconds, produced by Greg Kurstin. The song begins with some electronic arrangements before evolving into pop rock, basically on instrumentation sampled from the American Indie rock band Modest Mouse's "Float On." Jessica Sager commented that "from the harmonies to the rock-style drums to 'Raise Your Glass'-esque shout-along chorus to the liquor references," the song is musically "signature P!nk." The song was named as "classic P!nk," with a "swear-jar-worthy chorus" and an "an abrupt key change that only a singer like her could pull off." However, the song never changes keys. It stays in the key of G for the entire time.

"Blow Me (One Last Kiss)" is written in the key of G major with a moderate tempo of 114 beats per minute. P!nk's vocal range on this track covers nearly three octaves, spanning from D3 to G5. The song follows a chord progression of G–Bm–Em–C.[5]

"Blow Me (One Last Kiss)" received critical acclaim from music critics, with some of them noting its resemblance with Kelly Clarkson's "Stronger (What Doesn't Kill You)", which was also produced by Greg Kurstin. Andrew Hampp from Billboard gave a positive review of the song, giving it a score of 85 out of 100, and stating that the song is "an empowering breakup anthem in the vein of 'So What,'" considering it to be "a welcome return to form for P!nk at a time when everyone from Adam Lambert to Clarkson is co-opting her sound." Danielle Levy of the same publication wrote, "Feisty, energetic and vengeful as ever, 'Blow Me (One Last Kiss)' is another powerful kiss-off from the veteran pop star." Jessica Sager from PopCrush also gave a very positive comment over the song, awarding it four-and-a-half stars out of five and stating that the song "is an ideal breakup playlist song, because it’s simultaneously relatable and danceable, making even the most shattered heart feel a bit better, if only for a little over four minutes." Jocelyn Vena of MTV News wrote that the song "displays a lot of the signature girl-power sass that Kelly frequently has on her own tracks, but with a lot of the lyrical edge that has made P!nk a chart-topping superstar."

Kathy McCabe from Herald Sun gave a positive view of the song, stating that "If P!nk needed any further evidence she was a bonafide international pop superstar, she got it when her much-anticipated new single leaked worldwide a week before release." Tanner Stransky from Entertainment Weekly considered the song as "something that Clarkson could have featured on her own album" and with a "rocked-out, in-your-face edge" that is "signature P!nk." Contessa Gayles of AOL Music reviewed the song positively, writing that P!nk sings with "signature sass on the track's infectious, poppy hook." Robbie Daw of the website Idolator noted that P!nk "is always at her best when she combines her powerful vocals with edgy, biting lyrics." He finished his review by noting that the song was a "departure from the Max Martin-produced pop P!nk.

In the United States, the song debuted at number 58 on the Billboard Hot 100 and peaked at number 5. The song also topped the German Airplay Chart, becoming P!nk's tenth consecutive single to do so and increasing her (previously broken) record for the most consecutive number 1 singles in Germany. The song also appeared on the South African Airplay Chart, reaching a peak position of number 2. On Billboard's Dance/Mix Show Airplay chart, it gave P!nk her fourth number-one single on this chart. It has sold 2,164,000 copies in the US as of July 2013.

The music video for "Blow Me (One Last Kiss)" premiered on July 26, 2012 at 7:50pm EDT on MTV and VEVO and was directed by P!nk's longtime collaborator Dave Meyers, who directed the videos for almost all of her lead singles and many of her hits. The official colored version of the video was leaked online on August 31 and was officially posted on VEVO on September 5, 2012.

The video was shot entirely in black and white, with splashes of color and features opening titles in French, it begins with P!nk on a picnic with her love interest (Michael Cardelle) on a romantic setting, the two almost kiss before his phone rings, interrupting the kiss. As he takes the phone call, P!nk is disappointed and splashes him with a red drink, presumably red wine and walks away. As she walks away, she gets rid of her long dress and remains in a white bodysuit. She meets another man (Alexander Echeverria) and goes home with him, where he paints her. A party is about to begin. P!nk watches through the window as many female guests arrive. During the dance, P!nk arrives wearing a black suit with her hair pushed back. She dances with one of the women (Mosh) until she is interrupted by the man who brought her home; he gets down on one knee and proposes. P!nk is amazed and accepts by giving him her hand but is disappointed to find out the proposal was meant for her dance partner. During their wedding ceremony, P!nk is dressed completely in black with lace covering her eyes as if she is attending a funeral. Meanwhile, a flying biker (Andreas Holm-Hansen) pops a heart-shaped balloon containing the same red liquid from the beginning of the video, the liquid sprays the attendees as P!nk sings and dances cheerfully. She joins the biker as they fly away together. A colored version was also released.

MTV's James Montgomery assured P!nk's fans that she hasn't changed, while crediting the video for its angry and funny nature, saying "While your heroine might be saying she's a changed woman, the 'Blow Me' video proves that she's not. It's just as angry as her previous clips, and nearly as funny too." 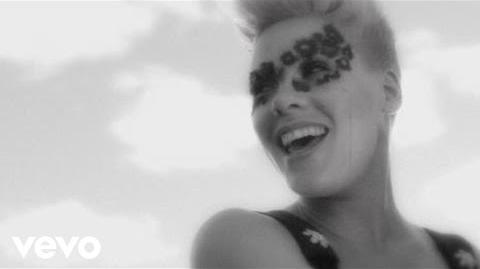 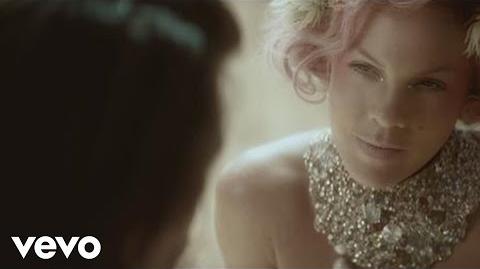 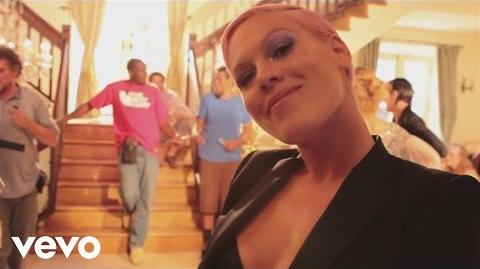 P!nk - Blow Me (One Last Kiss) (Behind The Scenes) 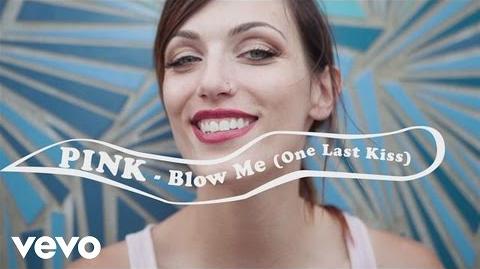 On September 6, P!nk attended the 2012 MTV Video Music Awards at the Staples Center in Los Angeles where she performed the song for the first time. During the performance, P!nk styled her hair with a mohawk and dyed it platinum blonde. She wore black overalls and a white shirt and kicked off her energetic performance with her signature hit "Get the Party Started" and a slight tribute to her Funhouse Tour where she performs an acrobatic move to ascend while singing the line "I'm coming up so you better get the party started." P!nk lands on the other side of the stage after flying above the crowd and kicks off "Blow Me." She takes a walk inside a sea of fans then climbs back onstage where female dancers dressed as giant lips shoot confetti on the crowd. P!nk wrapped up the performance sitting on a lip-shaped swing which lifts her up and takes her backstage.

"Blow Me (One Last Kiss)" was also performed at a promotional concert in Los Angeles a few days prior to the album's release. During the show, P!nk debuted several new songs, including "Are We All We Are," "How Come You're Not Here," "Try," and "Slut Like You," before ending with "Blow Me."

P!nk added the song to the setlist of The Truth About Love Tour, where it was included as the final song prior to the encore. In 2017, she headlined several music festivals, during which she debuted a reggae version of the song, which has since been performed in place of the studio version. 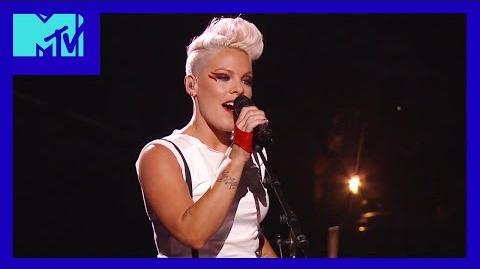 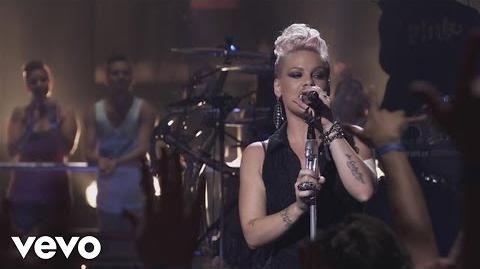 P!nk - Blow Me (One Last Kiss) (The Truth About Love - Live From Los Angeles)

Marley Rose (Melissa Benoist) and Wade "Unique" Adams (Alex Newell) performed the song in the 2012 Glee episode "The Role You Were Born to Play."