P!nk Wiki
Register
Don't have an account?
Sign In
Advertisement
in: Songs, Songs from I'm Not Dead, Singles,
and 2 more

"Dear Mr. President" is a song by P!nk featuring the Indigo Girls, and was recorded for P!nk’s fourth album, I'm Not Dead. The song is an open letter to then President of the United States, George W. Bush. The song criticizes several areas of Bush’s administration and terms in office, including the Iraq War, No Child Left Behind Act, disapproval of equal rights for homosexuals, lack of empathy for poor and middle class citizens, Bush’s strong religious beliefs, and Bush’s drinking and drug usage in college. P!nk felt that it was one of the most important songs she had ever written.

Prior to the album's release, P!nk talked to MTV about the song, explaining that, "I hope the president is proud of the fact that we live in a country where we can do things like that, where we can have dissent, talk, communicate and share our opinions. I also think it's pretty narcissistic to think that one of my songs will be heard by the president of the United States, but hey, that would be really cool."[1]

Speaking to Songfacts about the collaboration, Amy Ray of the Indigo Girls stated:

In January 2017, P!nk was asked by a fan via Twitter if she would release an updated version of "Dear Mr. President" in lieu of the controversial election of Donald Trump as president, to which she replied, "There aren't words for this shameful person."[3]

When P!nk appeared on Jimmy Kimmel Live! to promote the album, she thanked Kimmel prior to performing the song because many radio stations would not even let her talk about it because of its anti-Bush lyricism: "I have to thank you so much (because) you’re the only show that’s not afraid of letting me sing 'Dear Mr. President.' [...] I can’t even speak about it on radio."[4] She added that:

The unofficial ban prompted speculation that P!nk's music would be boycotted on radio, similarly to the Dixie Chicks, who were vocal onstage about their opposition to Bush's presidency and the Iraq War.[5]

While promoting her fifth studio album, Funhouse, P!nk provided some further clarification on the background of the song: "It wasn’t just like, 'I’m going to just do something political. I’m going to attack Bush.' It was a questioning song. It was sung in an innocent way. I actually toured it all over the world and the only place I got booed was Anaheim."[6]

Rolling Stone's Barry Walters praised P!nk for "writ[ing] a scathing letter in 'Dear Mr. President'" and "cooing righteous folk harmonies with Indigo Girls."[12] Sal Cinquemani of Slant was mixed, writing that "'Dear Mr. President,' which cleverly uses George W. Bush's own words against him, pales next to M!ssundaztood's 'My Vietnam.'"[13]

In 2012, P!nk performed it at the iTunes Festival in London; the performance was later included on an EP featuring recordings from the concert. She also sang it the following month during her VH1 Storytellers special, although the performance was an online exclusive.[14]

The video of P!nk's performance of the song live from Wembley Arena was added to the VH1 line-up of videos. 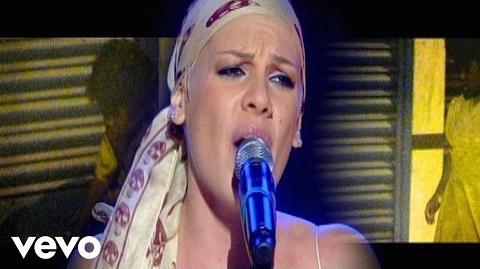