P!nk Wiki
Register
Don't have an account?
Sign In
Advertisement
in: Songs, Songs from M!ssundaztood, Singles,
and 2 more

Don't Let Me Get Me

"Don't Let Me Get Me" is a pop rock song by American singer P!nk. It was released as the second single from her second studio album M!ssundaztood in 2002. The song was written by P!nk and Dallas Austin, and produced by the latter.

"Don't Let Me Get Me" was generally a success, reaching top ten positions in 14 countries, and became her fifth single to peak inside the top ten US Billboard Hot 100 chart, stalling successfully at number eight. It also became her first number one on the US Mainstream Top 40 chart. The song received positive reviews from music critics, who praised the tone of the song.

A music video promoting the single was filmed and released in January 2002. The song was also featured in the trailer for the 2003 comedy Just Married.

During her appearance on MTV's Making the Video, P!nk discussed the track:

The song specifically references P!nk's conflict with her record label, who wanted her to change her image to create a more mainstream appeal, and mentions both LA Reid (head of P!nk's record label, Arista Records, at the time) and Britney Spears. In regards to the lyrics, "I'm tired of being compared to damn Britney Spears; she's so pretty, that just ain't me," P!nk stated that, "I don't want to get my point misconstrued. It's more about the record company than it is about Britney Spears. Reid later denied there being any truth to the lyrics implying that he had asked P!nk to change who she was to be successful: "She was poking fun at me, [but] I think she does prove a point here. You can be a popstar and have a brain, and have some creativity, and have some depth, and have some feelings, and not be afraid to bare those feelings."[2]

In a 2012 interview with The Los Angeles Times, P!nk revealed that "Don't Let Me Get Me" is the song she hates performing the most, adding, "I wish I could burn that song and never sing it again!" before laughing.[3]

"Don't Let Me Get Me" reached number one in New Zealand, number six in the UK, number eight in the U.S. and number twenty in Canada.

The song earned positive reports from music critics, but most gave sensitively mixed reviews upon her self-hating lyrical content. Robert Christgau in his consumer guide for MSN wrote that "Despite P!nk's audacious claim that she's not as pretty as 'damn Britney Spears,' celebrity anxiety takes a backseat to a credible personal pain rooted in credible family travails, a pain held at bay by expression." Jim Farber of Entertainment Weekly wrote that "In 'Don't Let Me Get Me,' she turns self-loathing into a perverse kind of anthem."

Jason Thompson of PopMatters wrote, "on the power rock of 'Don’t Let Me Get Me,' P!nk herself tells it like it is and attempts to break free from the image making machine. 'Tired of being compared / To damn Britney Spears / She’s so pretty / That just ain’t me.' Well, that’s debatable in itself, but the fact that P!nk takes it upon herself to call Spears out should be nothing short of revelatory. Spears certainly has nothing on P!nk in the vocal department. P!nk can actually sing. And damn well, mind you."

Jim Alexander wrote a negative review, saying that the rest of M!ssundaztood is full of bad songs and that "'Don't Let Me Get Me' and 'Dear Diary' see all pop joy expunged for acoustic seriousness, dreary unobtrusive beats and lyrics about relationship woes and record company badness."

The music video for "Don't Let Me Get Me," shot by director Dave Meyers, depicts P!nk as a high school student, in various scenes in which her nonconformity causes conflict with other students and school officials. A similarly-themed scene depicts her meeting with L.A. Reid, who tells her that in order to make her into a pop star, she will have to change everything about her outward appearance, in order to make her persona more comparable to that of Britney Spears, despite P!nk's insistence that that is not how she sees herself. Yet another scene shows her modeling for the cover of a magazine, irritated at how she is being made up by the lighting technicians, makeup artists and other personnel involved in the shoot. The video then shifts to a scene in which P!nk, now in control over her career, is welcomed back to her high school for a concert there. 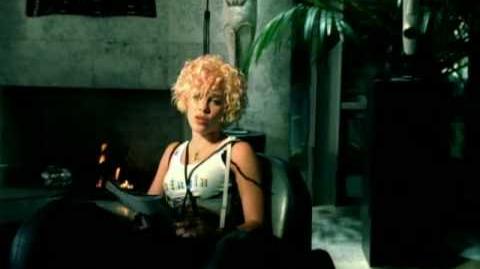 Since its release, "Don't Let Me Get Me" has been a staple in P!nk's concert setlists. It was the final song performed in the encore of the Party Tour, and also appeared in P!nk's subsequent tours—the Try This Tour, the I'm Not Dead Tour, the Funhouse Tour, and the Funhouse Summer Carnival. P!nk's 2013 The Truth About Love Tour was the first tour in which the song was not performed.

In August 2017, P!nk headlined several music festivals where up-and-coming British singer-songwriter James Gillespie opened for her. She handpicked him after hearing his own recording of "Don't Let Me Get Me," which he released as the follow-up to his debut single. During some of the shows, P!nk joined Gillespie onstage during his set to perform the song, although it did not appear in her own setlist. 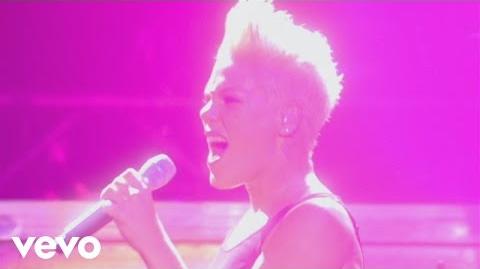 P!nk - Don't Let Me Get Me (from Live from Wembley Arena, London, England)