P!nk Wiki
Register
Don't have an account?
Sign In
Advertisement
in: Songs, Songs from Greatest Hits... So Far!!!, Singles

"Fuckin' Perfect" (stylized as "F**kin' Perfect" and entitled "Perfect" for clean versions and radio edits) is a song by American singer-songwriter P!nk. It was released as the second and final single from her first greatest hits album, Greatest Hits... So Far!!! on December 14, 2010. The song was written by P!nk with Max Martin and Shellback, who also produced the song. The song follows in the footsteps of "Raise Your Glass," in terms of lyrical content and themes, encouraging people to accept each other for their true identities.

P!nk has stated that the main inspiration behind the track is her husband, Carey Hart. Its music video, directed by longtime collaborator Dave Meyers, delivers a controversial message against depression, self-mutilation and suicide. In November 2011, the song garnered a Grammy Award nomination for Best Pop Solo Performance. "F**kin' Perfect" peaked at number two on the Billboard Hot 100, becoming P!nk's eleventh top-ten hit single in the United States.

In 2011, "F**kin' Perfect" was ranked at number fourteen on the "Top 40 Year-End Chart," behind her previous single "Raise Your Glass," based on Mediabase.

"F**kin' Perfect" was written by P!nk, Max Martin, and Shellback, and produced by the latter two. The Swedish pair previously collaborated with P!nk on several of her hits, including "So What," "Please Don't Leave Me," and "Raise Your Glass." It is a pop rock ballad, featuring crashing cymbals, simple synth beats and a reverberating string section.

In 2012, P!nk spoke with Entertainment Weekly about the song, revealing:

The song is written in the key of G major in common time with a tempo of 92 beats per minute. The song follows the I–V–vi–IV progression (G–D–Em–C), and P!nk's vocal range spanning from G3 to D5.

The song received generally positive reviews from music critics. Bill Lamb of About.com gave the song 4.5 out of 5 stars, praising the "Serious but uplifting lyrics," commenting: "It has just enough edginess to move P!nk away from bland middle of the road territory. Finally, the melody and arrangement make the song instantly memorable and familiar."

Filming of the music video began on December 5, 2010, during P!nk's first few weeks of pregnancy. The music video focuses primarily on the life of a woman who overcame several struggles to become a successful artist. The lead role was played by Tina Majorino, as confirmed by P!nk, via Twitter and Facebook, describing her as "insanely talented."

"F**kin' Perfect" was directed by Dave Meyers, who worked with P!nk on 12 videos before, including her VMA winner "Stupid Girls." It premiered on January 19, 2011 on MTV and P!nk's official VEVO channel. It was accompanied by a personal message from P!nk, posted on her official website: 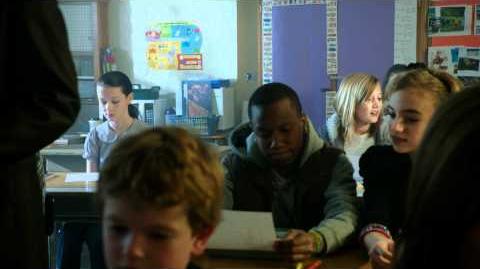 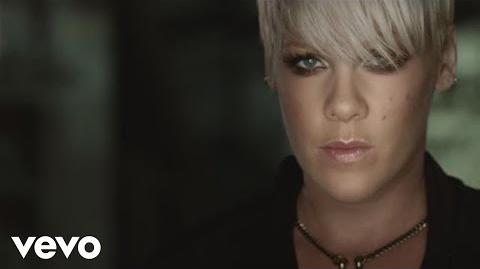 The explicit video begins in silence, with a man and woman lying in bed after having sex. The woman looks depressed and reflective. She stares at a worn teddy bear sitting in a nearby chair; the song begins and the viewer is transported back in time to when she was a little girl and a boy snatched the teddy bear from her. The little girl is then shown beating up the boy in the playground before being restrained by her teacher. In another scene, she is a little older and watching a birthday party with an inflatable castle across the street. Two children are sitting outside the castle, and they look up at her window. The girl immediately ducks down from the window and sits on the floor, looking sad.

In another scene, she's shown to be a teenager, applying makeup to her face, trying to be more confident in her appearance. However, her mother (Cynthia Stevenson) sees the makeup and outfit she's wearing as inappropriate and sends her up to her room. After which, the mother and her daughter appear to argue while the mother forces her to change into a simple dress and "appropriate" outfit, which the daughter still refuses. At school, she receives an "F" on a test; she picks up a pencil and transforms the big F into a scary-looking Medusa with a big mouth and a lot of pimples. She is shown vandalizing toilet cubicles with the words "Skinny bitches" and snorting drugs while looking on enviously at girls in the bathroom.

Next, her adult self (Tina Majorino) spies on two young women trying on dresses in a clothing store, wishing that she was as skinny as them. She is shown stealing a dress in the store only to get caught immediately, and is thrown out of the store while one of the women takes a picture of her on her phone. She is then shown weighing herself on a bathroom scale, ribs and spine clearly visible through her skin, indicating that she is anorexic. The next scene shows her lying in a bathtub carving the word "Perfect" in her arm with a razor. While lying in the tub, her eyes find the same teddy bear from her childhood. She gets up and cuts off her hair while sobbing and looking at the mirror.

Near the end of the video, the woman is shown working on a painting. Ultimately, she becomes a successful artist with her paintings displayed in an art exhibition. P!nk is shown "raising her glass" to her, and the girl smiles and raises her glass back. At the exhibition she meets the man she's in bed with at the beginning of the video. Back to the present, this man, played by Brad Norling, holds her and they smile. She gets out of bed and takes her childhood teddy bear into her daughter's room. The final scene shows her mouthing the words "You are perfect to me" to her daughter. Meanwhile, P!nk is shown singing in a room with pictures of the woman's flashbacks.

The clean version of the video uses "Perfect," the censored version of the song. The opening sex scene is cut from the video. The video follows the same storyline, but deletes some graphic scenes and adds a few takes where P!nk says "You are perfect" or "Less than perfect" instead of "Fuckin' perfect." The bathroom scene has been heavily edited and does not show the razor blade nor nearly as much blood, although it still shows the word "perfect" carved on her arm.

Billboard talked about the video in two different, and largely positive reviews, and described it as "controversial," saying, "Choosing to title her new single 'Fuckin' Perfect' and then open its video with graphic depictions of sex and bloody scenarios of cutting and suicide, P!nk knew her latest projects would ignite controversy. And that's just the way she wants it, because in this particular case, the 31-year-old singer's in-your-face approach is to ensure the message in the music isn't lost or ignored."

In the second review, Monica Herrera begins saying, "If P!nk's new music video for 'F**kin' Perfect' doesn't make you cry or cringe at some point, you've got thicker skin than we do." She also commented on a particular scene in the video, adding, "P!nk video's story directly just once, when she toasts to the girl's newfound happiness from across a crowded room...and it's enough to make you want to raise your glass right along with them."

MTV praised the video, giving a "hats off" to P!nk, while saying the video was a "moving call to awareness about a growing problem surrounding depression, numbness and powerlessness that leads to cutting and suicide. Her intention, as usual, is to ruffle a few feathers and shake a few sleepers as she points out 'You can't move mountains by whispering at them.'"

The video was nominated for Best Video With A Message at the 2011 MTV Video Music Awards, but eventually lost to Lady Gaga's "Born This Way."

On November 28, 2010 the song debuted at number ten in Australia, coinciding with the release of her greatest hits album, Greatest Hits... So Far!!!. The song's charting gave Pink her eighteenth top ten single in the country. It has since been certified gold by the Australian Recording Industry Association for sales of 35,000 units.

In the United Kingdom, the song debuted at number 71 on the chart issued on November 27, 2010. The next week the song dropped out of the chart, but re-entered at number 21 with the release of its music video and leaped to number 11 the following week. It peaked at number 10 on February 27, 2011.

"F**kin' Perfect" was released in the United States in December 2010. It had earlier bubbled under the Hot 100 at number 20 and then dropped out. It officially debuted at number 86 and then dropped out of the chart. A week later, it became the most added song on the radio in the entire country, therefore it re-entered the chart at number 57. One week later, it jumped to number 30, as the week's Airplay Gainer. The song soared from number 30 to number 11 that week with the Digital Gainer accolades for a second consecutive week.

On the issue dated February 2, 2011 "F**kin' Perfect" reached number two on the Billboard Hot 100, behind "Grenade" by Bruno Mars. It became P!nk's eleventh top 10 hit in the United States. The song reached number 1 on the Hot Digital Songs chart, with 241,000 copies sold, making it her second song to top that chart, after "So What" in 2008. On February 3, 2011, Billboard stated that the song was likely to top the Hot 100 on the chart issue of February 19, 2011. However, the predictions were incorrect and the song fell to number 4 while Wiz Khalifa's "Black and Yellow" topped the chart. Despite the false predictions for the February 19 issue and the song's descent on the Hot 100, Billboard chart experts considered the song a nominee to become the chart's 1,000th number 1 song in its 52-year history, it competed against Lady Gaga's "Born This Way" and the Glee Cast's nine tracks that were released digitally following the February 6 and February 8 episodes. The February 26 issue of the Hot 100 revealed that "Born This Way" earned the milestone, debuting atop the chart and becoming its 1,000th number 1 song.

On the Billboard chart week of March 26, 2011, "F**kin' Perfect" reached number one on both the Pop Songs and Adult Pop Songs charts, which at the time, gave P!nk the record for most number ones on both charts. On Pop Songs, P!nk ties Lady Gaga for second most number 1's with seven, while on Adult Pop Songs she ties Nickelback for the most, with five number 1 hits.

The song held the Digital Gainer certification for three consecutive weeks, the longest streak since Leona Lewis' "Bleeding Love" in 2008. It continues its Airplay chart ascent and has so far peaked at number 4 with 55 million impressions and has so far collected more than two million digital units in the USA. In the week ending March 12, 2011, the song jumped from number 6 to number 4, making it the first time that two songs including the word "fuck" in their titles were in the top 5, as "Fuck You" by CeeLo Green was number two that week. The issue also featured Enrique Iglesias' hit single "Tonight (I'm Fuckin' You)," which was also within the Top 10 that week, marking three simultaneous Top 10 hits with the word "fuck." However, "Tonight" was credited on the Hot 100 with its more popular clean version, "Tonight (I'm Lovin' You)." "F**kin' Perfect" sold 2,497,000 digital copies in 2011 and became the 27th best-selling song of the year in the United States. The song has sold over 3 million downloads as of May 2013.

The song topped German airplay charts, becoming P!nk's eighth consecutive single to do so and increasing her -previously broken- record for the most consecutive number 1 singles in Germany. 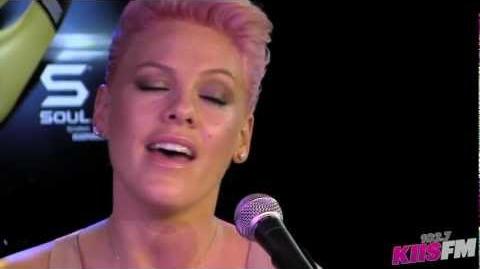