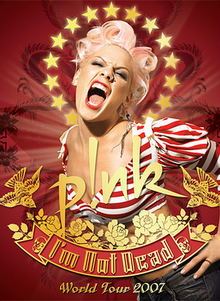 The I'm Not Dead Tour was the third concert tour by American singer-songwriter P!nk. Launched in support of her fourth studio album, I'm Not Dead (2006), the tour reached Europe, North America, Australasia, Africa, and Asia.

After performing several promotional shows throughout North America and Europe, P!nk announced her tour in the spring of 2006. The I'm Not Dead Tour began in North America in nightclubs and theatres. P!nk explained, "Small gigs, that's where it's at [...] You can feel everyone's sweat, it's just so close and intimate. It's stinky, it's smoky, it's good." P!nk continued her tour into Europe and Australia, playing predominately in arenas. As her album gained momentum in the US, she joined Justin Timberlake as the opening act on his FutureSex/LoveShow tour at select venues in the US. P!nk returned to Europe during the summer of 2007, playing open air/amphitheater festivals. She concluded her tour in South Africa. The tour became one of the most successful tours in both 2006 and 2007. In Australia, she became the most successful female artist during that time. The Australian tour grossed $41.5 million and was P!nk's most successful tour until her Funhouse Tour in 2009.