P!nk Wiki
Register
Don't have an account?
Sign In
Advertisement
in: Songs, Songs from I'm Not Dead, Singles,
and 2 more

"Leave Me Alone (I'm Lonely)" is a song by P!nk, and was the sixth single from her fourth album, I'm Not Dead. It was released in 2007 as a physical CD single in Australia, and as a download-only EP in the UK with "Dear Mr. President". The EP features live versions of both songs. Certain European countries received a physical CD release of the single. In the beginning of February 2007, before its official release as a single, the song was put on the B-list of BBC Radio 1. It debuted on the UK Singles Chart at number sixty, and it rose to number thirty-four, her lowest-peaking UK single at that time. In Australia the single debuted at number eleven and peaked at number five, becoming P!nk's fourth top five hit from the album I'm Not Dead; the single also reached the top five in New Zealand and was certified Gold on October 5, 2008, selling over 7,500 copies.

"Leave Me Alone (I'm Lonely)" was written by P!nk and co-written and produced by Butch Walker. It is a power-pop song, in which she demands some time away from a clinging lover.

IGN wrote a mixed to favorable review for the song, stating that "The title should say it all and reveal the ball of confusion that P!nk really is. It's one of the most rockin' tunes on the whole album, but it's over-the-top arena pop rock, not ball crunching, barroom rawk." Quentin Huff from PopMatters thought that "P!nk summons the spirits of the Go-Gos and Tiffany (“I Think We're Alone Now”)" on the track. Todd Murphs from Stylus Magazine wrote a mixed review, saying that "the ode to schizophrenia, 'Leave Me Alone (I’m Lonely),' which may rely too much on the chorus, but at little over three minutes, it’s hardly a bother. Especially when she’s dropping f-bombs left and right." Justin Lewis of Yahoo! Music wrote a positive review and stated that "'Leave Me Alone (I'm Lonely)' sounds like a lost jam session between The Ramones, The Cars and Cyndi Lauper; the sleek new-wave-meets-emo-meets-power-punk-meets-pop arrangement selling the song more on nostalgia than melody. And it works." Bill Lamb from About.com wrote positively that the song is a "bubblegum-on-speed buzz." Entertainment Weekly's Chris Willman wrote that "it's a pissy yet affectionate rocker that throws down competing desires for attentiveness and space in a relationship." Barry Walters from Rolling Stone wrote that the song "suggests a mood-swinging Strokes mash-up."

There were two covers used for the single artwork. Both feature P!nk performing live on tour with her flying through the air above the audience in the background, however, different images are used. The first cover was used for the CD single and the digital EP. The second cover was used solely for the clean single, which was released as a standalone song on some iTunes Stores. 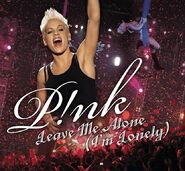 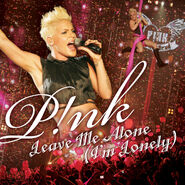 During the Funhouse Summer Carnival Tour, alternate videos were shot for "Funhouse", "Please Don't Leave Me" and "Leave Me Alone (I'm Lonely)." The latter was never filmed, which caused a fuss back during the song's release period among P!nk's fans. P!nk released the video for her fans. Directed by Cole Walliser the video features P!nk and two fat women on the beach. P!nk is playing the guitar alone, suddenly the two women show up. The rest of the video shows P!nk running away from them until finally ditching them.

Despite not being a worldwide single, the song has become a staple for touring. It was featured on the I'm Not Dead Tour, Funhouse Tour, and the Truth About Love Tour. It was featured on all three of the tours' DVDs as well. The performances all feature the same idea, with P!nk asking her fans to do their "terrible dance moves".