The Truth About Love Tour 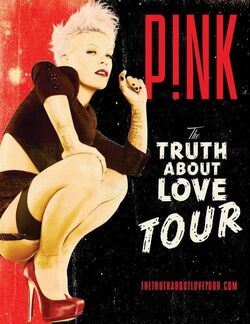 To transport and set up the tour, there was a chartered 747 jumbo jet, nineteen semi-trailers, and eighty crew members to set up 400 tons of equipment. She also opened her first pop-up store which featured things that are not normally available at her concerts. Merchandise included autographed items, backstage passes, T-shirts, key rings, show tickets, etc.

Over 320,000 tickets for the Australian leg of the tour were sold within a few hours of release. The tour broke records for a solo artist tour in Australia with over 650,000 tickets sold. 200,000 tickets were sold for shows in Melbourne breaking a record P!nk had set herself with 2009's Funhouse Tour. At the 2013 Billboard Touring Awards, Pink won the award for "Top Boxscore."

The first North American leg of tour grossed $28.3 million from 26 shows, with an average gross per city of $1,134,385. The European leg grossed $30.7 million. The nine-week leg of Australia was expected to generate $100 million.

In Australia, initial grosses reported topped $31.6 million ($29.2 million) from two venues in Sydney and one in Brisbane, however that total did not include the four-night stint in the city of Adelaide, and a record-breaking eighteen shows in Melbourne.

The Truth About Love Tour was the third highest grossing tour of 2013 behind Bon Jovi, and Cirque du Soleil's Michael Jackson The Immortal World Tour. P!nk was also the highest grossing female touring artist of 2013.

The Truth About Love Tour broke two records at the Rod Laver Arena, in Melbourne, Australia. P!nk is the artist who has performed the most shows at the venue, with a significant 18 sold out shows on The Truth About Love Tour. This record surpassed her previous 17-show record at the venue during her 2009 Funhouse Tour. She was also the first artist to sell more than 250,000 tickets at the venue. On August 26, 2013, P!nk was rewarded a plaque backstage, a second pink pole, a star at the venue's entrance and Door 18 was painted pink.

P!nk broke Kylie Minogue's record of most concerts by a female performer at the Entertainment Centre having played twenty-six shows at the venue. Her four sold-out shows at the Allphones Arena in Sydney with more than 67,000 tickets sold, broke the record set by fellow popstar Britney Spears in 2009 with her The Circus Tour.

After playing to nearly 15,000 fans per night in Perth, P!nk now also holds the record for most performances by an artist at the Perth Arena, as well as the top four attended events at the venue.

Michael Coppel, President and CEO of Live Nation Australia, thanked P!nk for spending three months on tour in this country. "Everyone at LNA has been thrilled to be involved in P!nk's record breaking tour, continuing a decade-long association with an artist who continues to set new standards and who has now sold in excess of 1.5 million tickets in Australia."

The pop star broke her own mark at Melbourne's Rod Laver Arena with the 18th sold out performance, having set a house record in 2009 with seventeen shows on her Funhouse Tour. The combined gross of $29.2 million (US$) in Melbourne was the largest gross for any headliner at a single venue in 2013.

P!nk also sold out the KFC Yum!, in the process becoming the highest-grossing female artist to play the arena to date.

The Truth About Love Tour received widespread acclaim from music critics, who praised her vocal abilities and stage presence.