P!nk Wiki
Register
Don't have an account?
Sign In
Advertisement
in: Songs, Singles, Songs from Beautiful Trauma,
and 3 more

"What About Us" is a song by American singer-songwriter P!nk. It was written by P!nk, Steve Mac, and Johnny McDaid, with production handled by Mac. The song was released through RCA Records on 10 June 2017 as the lead single from P!nk's seventh studio album, Beautiful Trauma (2017).

It topped the charts in Australia and Scotland and has reached the top 10 in Austria, France, Germany, Switzerland, and the United Kingdom as well as the top 20 in Canada and Hungary.

P!nk hinted at an upcoming release in a tweet on July 16, 2017. When a fan asked when they could expect new music, P!nk wrote: "Well I'm shooting a video next week." On July 21, 2017, P!nk shared a video from the filming set, captioned: "Video #new #fyeah #itsallhappening." The day after, she shared a photo on social media, revealing the new single's title and release date.

"What About Us" is described as an emotional club ballad and dance floor anthem with pounding drums and an array of synthesizers. The song has also been described as a protest song. It is written in the key of A♭ major with a tempo of 114 beats per minute in common time. The song follows a chord progression of Fm–D♭–A♭, and P!nk's vocals span one and a half octaves, from A♭3 to E♭5.

"What About Us" received critical acclaim from music critics, with some noting its political themes as a highlight. Althea Legaspi from Rolling Stone states: "'What About Us' builds from a sparse ballad into an emotional dance floor anthem packed with pounding drums and a gorgeous array of synths." Patrick Crowley from Billboard wrote: "P!nk throws out the rules in favor of authenticity once again."

P!nk gave her first televised performance of "What About Us" within a medley of her greatest hits at the 2017 MTV Video Music Awards on August 27, during which she received the prestigious Michael Jackson Video Vanguard Award. She had previously performed the track on various dates throughout her festival tour in 2017. 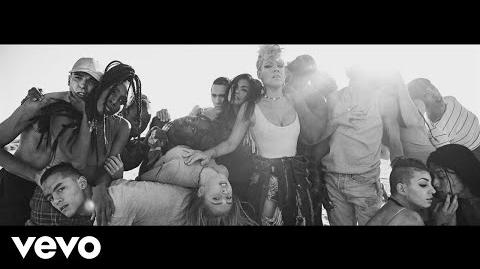 P!nk - What About Us (Official Video) 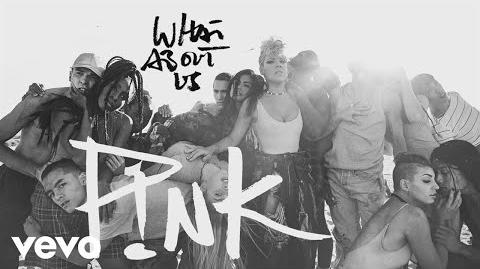 P!nk - What About Us (Lyric Video)