P!nk Wiki
Register
Don't have an account?
Sign In
Advertisement
in: Songs, Songs from I'm Not Dead, Singles,
and 4 more

"Who Knew" is a song by American recording artist and songwriter P!nk, which was taken from her fourth studio album, I'm Not Dead. The song was written by P!nk, Max Martin and Lukasz Gottwald, while it was produced by Max Martin and Dr. Luke. "Who Knew" was released as the second single off the album worldwide in 2006, while it was re-released to U.S. radio as the album's fourth single in the United States in 2007, after the success of "U + Ur Hand". Musically, "Who Knew" is a pop rock song, which has smaller elements off ballad and soft rock music. Lyrically, it is about losing a friend because of drugs. "Who Knew" received positive reviews from most music critics, who noted it as a strong song on the album and praised the lyrics, however some critics thought the song was too similar to singer Kelly Clarkson. The song was commercially success worldwide, where it peaked in the top spot in countries including Australia, Czech Republic, Germany, Hungary and component charts in the United States. The song is P!nk's longest chart runner on the Hot 100, spending 36 weeks before dropping out.

An accompanying music video was released for the single, where it shows P!nk singing in a county fair, with a storyline about two young lovers who end up being separated after the guy begins using drugs. The song has been performed on many of Pink's world tours, including I'm Not Dead Tour, Funhouse Tour and its extension tour Funhouse Summer Carnival Tour. The song was eventually included in P!nk's debut compilation album Greatest Hits... So Far!!!.

"Who Knew" was written by Pink, Max Martin and Dr. Luke, while it was produced by Martin and Dr. Luke. "Who Knew" was released as the second single off the album worldwide in 2006, while it was re-released to U.S. radio as the album's fourth single in the United States in 2007, after the success of "U + Ur Hand". Pink has stated that "Who Knew" is her favorite song from her first compilation, Greatest Hits... So Far!!!, as it can be about almost everyone. She has dedicated some live performances of the song to various people, including her husband, Carey Hart, and their daughter, Willow. 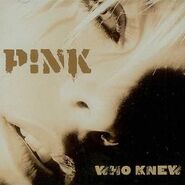 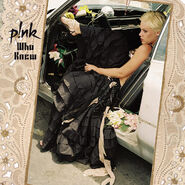 "Who Knew" musically is a pop rock song, which features soft rock and ballad music. According to Musicnotes.com, which was published by Kobalt Music Publishing America, Inc., the song is set in the key A Major. Pink's vocal's span from E3 to D5. Lyrically, Pink had explained that the song is about "the death of friendship", as well as friends of hers who died as a result of drug overdoses. The song is about several people. Billboard magazine, in its second review of the song (to accompany the U.S. re-release), called it "another cool, smart, plenty passionate melodic jewel about the death of a friend and/or friendship, with an instantly identifiable, quick-to-the-point, singalong track—maintaining Pink's stance as the smartest female millennium-era singer/songwriter, dazzling in star quality as alterna-pop's premier princess." The song features acoustic guitar, keyboards, drums, and electric guitars. Gottwald, Martin and Pink co-wrote another song on the album, "U + Ur Hand".

The song received a positive reception from most music critics. John Murphy from MusicOMH wrote that the song "is perfect driving, anthemic pop." Stylus Magazine said ironically that "It’s 'Since U Been Gone' spinning its wheels at half-speed, mutedly wondering where the tune went." Yahoo! Music's Justin Lewis somewhat echoed the same thought of Stylus Magazine, writing that "it sounds like the lo-fi twin sister of 'Since U Been Gone' (same acoustic opening, same 4/4 drumbeat and same hushed-verse/loud-chorus blueprint) but it takes several listens before you realize both songs were cut from the same mold. Sal Cinquemani from Slant Magazine wrote a mixed review, saying that "Songs like 'Who Knew' and 'Long Way to Happy', though good, sound more hair metal than punk", while also noting that it "follows the steps of [Kelly] Clarkson's recent hits."

In the Oceanic region, the song debuted at number six on the Australian Singles Chart. The song then rose and peaked at number two for two consecutive weeks. In total, the song stayed in the charts for thirty-two weeks, becoming P!nk's second longest charting single in that country. The song is also the seventy-fifth Best Of All Time single in Australia, and is certified platinum for sales of over 70,000 copies. It was ranked at number nine on ARIA's Top 100 singles of 2006. The song had debuted at number thirty-six on the New Zealand Singles Chart, and eventually rose to number eleven, just missing the top ten. The song spent a total of twelve weeks on the charts. In the European markets, the song was generally successful. "Who Knew" entered the UK Singles Chart at nineteen in early June, 2006 and ascended to a peak at five the following week. It is her joint fifth highest charting single in the UK and her second longest charting behind only "So What". With a total of 26 weeks inside the top 100 songs it beats her number-one hit "Just Like a Pill". The song had success throughout other charts in Europe, where it peaked in the top twenty in Switzerland, Austria, France, Belgium, Finland and Norway, while it peaked in the top fifty in The Netherlands and Sweden. When the single was originally released in North America, "Who Knew" was less successful. Though it peaked at number nineteen on the BDS Airplay Chart in Canada, it was virtually ignored by American radio. In the U.S., where it was released to mainstream radio on May 8, 2006, it failed to chart on the Billboard Hot 100, initially reaching number 18 on the Bubbling Under Hot 100 Singles chart (which comprises the most popular songs yet to enter the Hot 100). Billboard magazine credited the poor performance of the single on radio with significantly reducing momentum of initial sales of I'm Not Dead.

The single's video was directed by Dragon, a team comprising Sam Bayer, Robert Hales and Brian Lazzaro. It was filmed in the weekend beginning April 15, 2006 in Los Angeles, United States, and it was released to the Internet and to UK music channels in early May 2006. The video reached number one on MTV Germany's top ten and on TRL Italy. "Who Knew" was voted number one on TRL Germany twenty times, allowing Pink to earn the "Golden Tape". In the U.S. Total Request Live broadcast a "First Look" of the video on May 22, and it debuted on the show's top ten countdown the following day; it spent eight non-consecutive days on the countdown (until June 9), peaking at number seven. It features a young couple visiting a fairground and going on the rides, and at one point the boy puts a necklace on the girl. The video flashes back to the boy secretly injecting himself with drugs on a previous night while the girl is sleeping. At the carnival, when the girl is playing a game, the boy walks away. The girl realizes he's gone and follows him, but when she tries to get him to stay with her he gets violent. He goes to the back of the fairground to inject himself with drugs and breaks into a sweat. His girlfriend wanders around looking for him, and finds him unconscious; he has overdosed. She gives him a kiss, gives back the necklace and phones for an ambulance; after it has arrived, she walks away crying. The video is inter-cut with shots of Pink singing the song at the entrance to the fairground. In Pink's 2008 album Funhouse, she compares life to a carnival, because carnivals are supposed to be enjoyable, but in actuality, they're not. The setting for the music video with the fairgrounds provides a false sense of security for the girl in the music video.