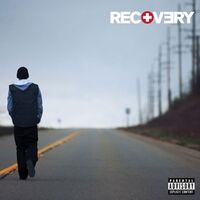 "Won't Back Down" is a song by American hip hop artist Eminem, featuring American pop singer P!nk, recorded as the fourth track on his seventh studio album Recovery (2010). It features production from Aftermath Entertainment producer DJ Khalil, who helped write the song along with Eminem, Erik Alcock and Columbus "Rahki" Smith . Upon the release of Recovery, the song received generally positive reviews from music critics, who praised its aggressive nature and production. Although not released as a single, "Won't Back Down" appeared on four national charts. It was used in the video game Call of Duty: Black Ops and its trailer as well as the trailer of the action film Mission: Impossible – Ghost Protocol. It was performed on Saturday Night Live and Late Night with Jimmy Fallon. The song was included in the setlist of Eminem and Rihanna's 2014 co-headlining tour, The Monster Tour, although Rihanna performed P!nk's part.

"Won't Back Down" was written by Eminem, DJ Khalil, Erik Alcock and Columbus "Rahki" Smith. Along with most of the songs from Recovery, "Won't Back Down" was recorded at 54 Sound and Effigy Studios in Ferndale, Michigan, with recording carried out by Mike Strange. Originally, the song was set to be a solo record, with Eminem singing the chorus himself. Later, Liz Rodriguez, who is also featured on Recovery's "25 to Life" and "Almost Famous", recorded the song's chorus. Eminem however, explained in an interview that after recording his vocals for the song, he decided to include P!nk on the song as he "felt like she would really smash this record." Rahki co-produced the song with Khalil.

Although "Won't Back Down" was not released as a single, it charted on four national charts worldwide due to digital sales on the release of Recovery. The song reached its highest position on the US Billboard Hot 100, where it peaked at number 62 on the chart for the week ending of July 10, 2010, although it fell off the chart the following week. The song also charted in Australia, Canada and the United Kingdom, peaking at number eighty-seven, sixty-five and eighty-two on their respective national charts, although on all three the song again only appeared for one week. Upon its release, "Won't Back Down" received generally positive reviews from most music critics. David Jeffries of Allmusic wrote positively of the song, describing the song as a "lurching heavy metal monster" that "could be used as the lead-in to 'Lose Yourself' on any ego-boosting mixtape", but wrote more critically of the lyrics, denouncing the pop culture jokes featured throughout the song, particularly ones aimed at Michael J. Fox, calling the line "Make like Michael J. Fox in your drawers, playin' with an Etch-A-Sketch" "less effective" than other jokes aimed at him. Steve Jones of USA Today described it as "rock-tinged" and stated that Pink's appearance provides "outside star power".

A remixed version of the ESPN trailer of the video game Call of Duty: Black Ops featuring "Won't Back Down" was released on June 14, prior to the E3 Activision conference for which he also performed. The song was also featured in the game's credits and zombie mode map "Five" as an easter egg. The official trailer for the 2011 action film, Mission: Impossible – Ghost Protocol, features "Won't Back Down".

Eminem has performed the song on live sketch comedy show Saturday Night Live accompanied by Lil Wayne and hypeman and D12 member Mr. Porter. Eminem wore a black jacket and a skull cap. Idolator reacted positively to Eminem's performance, stating that he proved "once again what a dynamic and energetic live performer he is on this exceptionally angry tune (even by Slim Shady standards)." He also performed the song on Late Night with Jimmy Fallon. P!nk was not present for either performance.