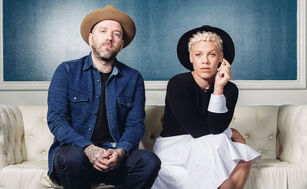 You+Me (sometimes written You Plus Me) are a folk music duo consisting of Canadian musician-singer-songwriter Dallas Green, better known as City and Colour, and American singer-songwriter Alecia Moore, better known as P!nk. Their debut album, entitled rose ave., was released on October 14, 2014, by RCA Records. The first single from the album, "You and Me", premiered on their Vevo channel on September 8, 2014.

Moore and Green met through mutual friends several years prior to their collaboration. The first time they sang together Green had asked Moore to sing with him at one of his shows. They remained friends and Green opened several shows for Moore in the U.K. Moore had considered singing acoustic ballads, and as friends the two had considered collaborating for several years. In March 2014, their schedules allowed them to get together and compose original songs. They had written musical nuggets in advance, and their debut album Rose Ave. took shape within a week. The artists attributed their quick progress on the freedom from usual production pressures and the joy of making music together. The name of the duo, You+Me, is based on the two friends wanting to sing together.

The duo's debut album rose ave. was released on October 14, 2014. The work was initiated and produced by Moore and Green. They had considered releasing the music independently, however in order to reach a large audience and for legal concerns the album was released through RCA Records. The album charted at number one in Canada and at number four in the United States, the home countries of the artists.